Training for peer educators „LABOR RIGHTS OF YOUTH, PHENOMENA ENDANGERING THEM AND MECHANISMS OF PROTECTION“ has started.

Young trade union activists from Serbia, Bosnia and Herzegovina, Montenegro, North Macedonia, Croatia and Slovakia will learn in Bratislava from May 20 to 25 on human rights, with the focus on labor rights of youth, negative phenomena that endanger them and available mechanisms of protection. Idea is to initiate further transfer of gained knowledge to their peers at the workshops which will be direct product of this gathering in Slovakia. 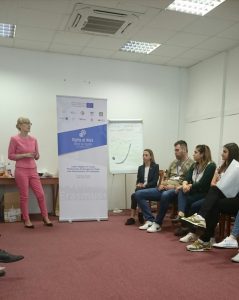 Support to young participants, not only during the training, but also in their future work will be provided by the trade union partners on the project (Trade Union of Administration of Republika Srpska, Trade Union of Administration and Justice of Montenegro, Trade Union of UPOZ from Macedonia, Trade Union of Administration of Serbia), but also by youth organisations dealing with rghts of young people – project coordinator Develepment Center for Youth from Belgrade, host of the training YouthWatch, Foundation Budva, Trade Union Education Center from Banja Luka and Coalition of youth organsations SEGA from Prilep. Representative of the Center for Advanced Studies of South-eastern Europe of the University of Rijeka, as a partner which coordinated the research setting the grounds for future direction of the project, will be present as well.
During the project, so far the research has been carried out in Serbia, Bosnia and Herzegovina, Macedonia, Montenegro and Slovakia on the awareness of young workers with their labor rights, based on which national reports and regional cross-section were made, at the same time comparing the situation in countries that are not members of the European Union Union with one that is a member state – Slovakia.

During the training in Bratislava, work on the preparation of promotional and information campaign will continue, and after the training, the emphasis will be on the workshops of young trade union educators who will conduct the same among their peers in the communities they are coming from.

Training for educators is a part of the project “Rights at Work, Work on Rights” supported by the Erasmus+ programme: KA2 – Capacity Building in the Field of Youth/Western Balkan Window.